Bottom of the 9th

Lucky this angler’s dad wanted to take him fishing from shore in Maui. Stoked this angler had the stamina to cast and retrieve for 3+ hours until he was rewarded with this highly prized catch in the last 10 minutes of fishing.
After catching a handful of smaller fish; small blue fin trevally, small trumpet fish, the bite kind of got slow for a bit. But we kept trying and trying, being persistent. The angler was casting really well and got the flex of the rod wired and was able to cast further and further throughout the day. With only a few minutes left of fishing he ended up hooking into a really nice fish. It sure hit the bait like a blue fin trevally with a hard fast run and immediately we knew we had a good size fish on. He did a great job pulling it in. When the fish got close to the rocks where we were standing it swam under the ledge for a moment and we thought it was going to come off. I still couldn’t tell exactly what kind of fish we had on. Certainly not expecting it to be what it was. As soon as the fish came out of the undercut it was close and we could see that it was a gray snapper which are very difficult and rare to catch from shore. There were two other anglers on the rocks near where we were fishing. They could see the fight and hear the reel going. They were watching us reel the fish in and as soon as we landed it we held the fish up and they cheered and yelled at us “uku! sashimi!”. It’s a special fish to catch from shore, highly prized, and great to eat.
Another awesome trip! You never know what an afternoon shore fishing tour will provide. 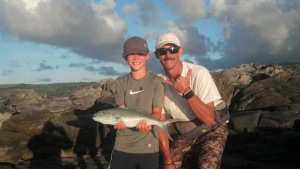 Redemption
The 3 P’s Pay Off! – Patience, Persistence, and Perseverance