The 3 P’s Pay Off! – Patience, Persistence, and Perseverance

We were patient when we arrived. And from the moment we started fishing we were persistent in switching up the baits, techniques and the spots at this location. We persevered through the weather that started rolling in which was consistent showers that lasted pretty much the entire morning. But we were ready for it with Jackets so everyone was comfortable and neoprene shoes so our feet were warm.

After a few hours fishing on the rocks all 3 of us were close to each other fishing with light tackle. We had a bigger rod next to us soaking some fresh dead bait. It starting going off! Screaming line off the reel with authority. I quickly ran over to the rod, tightening the drag making sure the fish was still on. I could tell that it had some serious weight to it. I got the rod into the anglers hand and it was difficult to hold the rod up. The fish was pulling so hard. After a few long minutes. The fish started to come in towards the rocks. As it was approaching it starting going under the ledge of the rocks we were standing on.

Almost breaking us off we managed to pull it out from under neath with our 10’6″ rod. When the fish was done fighting the big challenge was to get it up on to the rocks. That took twice as long as the fight. There was a good 3-4′ surge of white water on the rocks so we really had to time landing this fish. What an amazing catch!

This is such a pretty fish. The word kagami in Japanese means mirror. That’s why they call it a kagami ulua. The skin is like a mirror – shinny, flashy, and iridescent. The thread fin trevally is a very prized fish to catch.
Just goes to show anything can happen when you’re fishing from shore in Maui. 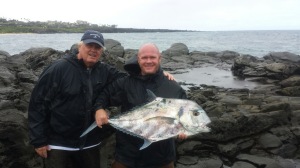