The angler’s husband actually booked the trip with the hope to catch a bone fish because he has targeted them before in other locations but has never caught one. So he thought he would give it a try shore fishing in Maui. At the beginning of the trip my client said “my wife always out fishes me she has a lot of experience”.

So anyone that knows about bone fish is that they’re not easy to catch.
The conditions could not have been any better. We were actively fishing for about an hour when we got a double strike. I knew they both had fish on and that her’s was bigger because it was smoking line off the reel and it was difficult to keep the rod up. So immediately I asked her husband if he was ok and he said yes go help her. He got a trumpet fish and it came in quick.
So the fish ended up running down the shoreline and in toward the beach. Then ran all the way up the beach straight toward us. We got a really good look at what we had on the end of the string. And then the thing took off another eighty yards straight out and a hard left back toward the beach. As the fish was coming in toward us again the angler was getting tired but the fish was too and I knew it was pretty much done fighting.
Once we grabbed the fish and pulled it out of the water we could tell how big it was; a 10lb. bone fish very round and thick with beautiful color. That was a fish fight of a lifetime! 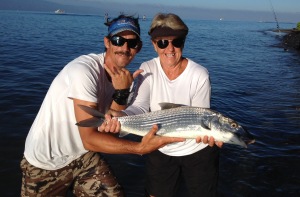 The 3 P’s Pay Off! – Patience, Persistence, and Perseverance
Oooohhh Baracuda