By beeRy on October 7, 2014 in Uncategorized

Just another beautiful Maui day – shore fishing off a remote cliff 25 feet above the water.
We were throwing live bait having some trigger fish kind of harass the bait. Then just as the angler Kent was saying “argh get away from my bait” to the trigger fish they immediately took off and a big blue fin trevally (omilu) came up and hit it!

Instantly it peeled out about 75 yards of line with authority and then slowed down.  The fish ran in toward shore and then a big hard run back out.  It came back inside and toward the cliff.
I went down to the water’s edge to retrieve the fish and make sure the line stayed away from the rocks.  He went underneath twice and kind of got stuck. I thought we were going to lose it seeing the line rub along the coral. Surprisingly it stayed on and didn’t break for how heavy the fish was.

I could hear Kent yelling from up above “watch out there is a barracuda heading right for you!” I couldn’t see him because my head was down. When I pulled the trevally in I noticed there were two fresh bite marks on the fish’s tail right next to where I reached down with my hand to pull it out of the water.  And that is how close I came to having my hand chopped by a barracuda getting this fish out of the water.  It was well worth it!
Kent said the barracuda was twice as big as the one we saw earlier in the day which was 20-30lb.
He said the one that was chasing the omilu could have bitten the one we saw in half. So it must have been about 40-50lbs.

Kent fished with me last year and we caught three small blue fin trevally about 1-2 pounders.

This 12lb. omilu was  his redemption! 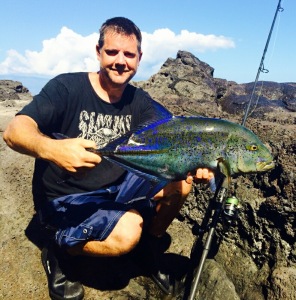 Off The Beaten Path
Bottom of the 9th